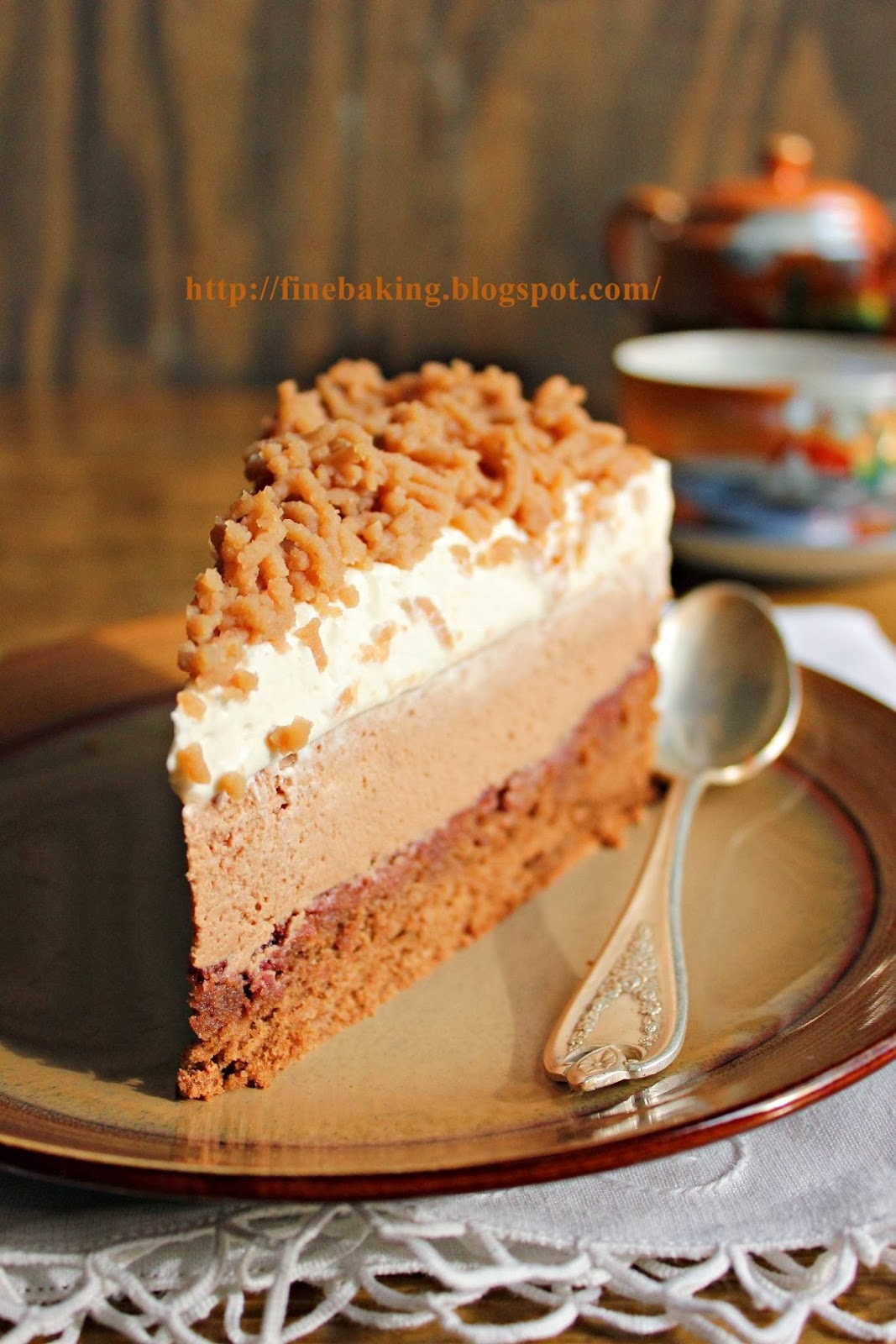 For some reason, chestnuts are not that popular in U.S. And to me, nothing says winter like chestnuts. I grew up in a town that had street vendors selling fire roasted chestnuts during winter. To me they are nostalgic street food. Just the smell of them brings back so many memories for me. Snowflakes, roasted chestnuts, mulled wine, fireplace, friends...
With record breaking low temperatures in Chicago, this cake was my first choice.  Its so light, aromatic, creamy, it's really wonderful.
The chocolate base is soaked with cherry jam that is mixed with cherry brandy. Its topped with  a chocolate cream layer with chestnut puree, a white layer with whipped cream and baileys, and chestnut puree with rum.

For the chocolate base:
85 gr. butter
85 gr chocolate melted
50 gr sugar
4 eggs
100 gr sugar
60 gr flour
Preheat the oven to 350F/180C.
Cream the butter with 50 gr. of sugar and melted chocolate. Add egg yolks one at the time. Whip the egg whites with 100 gr of sugar until stiff. Fold it into the chocolate mixture. When incorporated, add flour and fold gently. Scoop the batter onto prepared 9 inch baking pan lined with parchment paper. Bake for about 25 min. Cool, and moisten the cake with  60 ml of cherry brandy mixed with 200 gr of cherry jam. 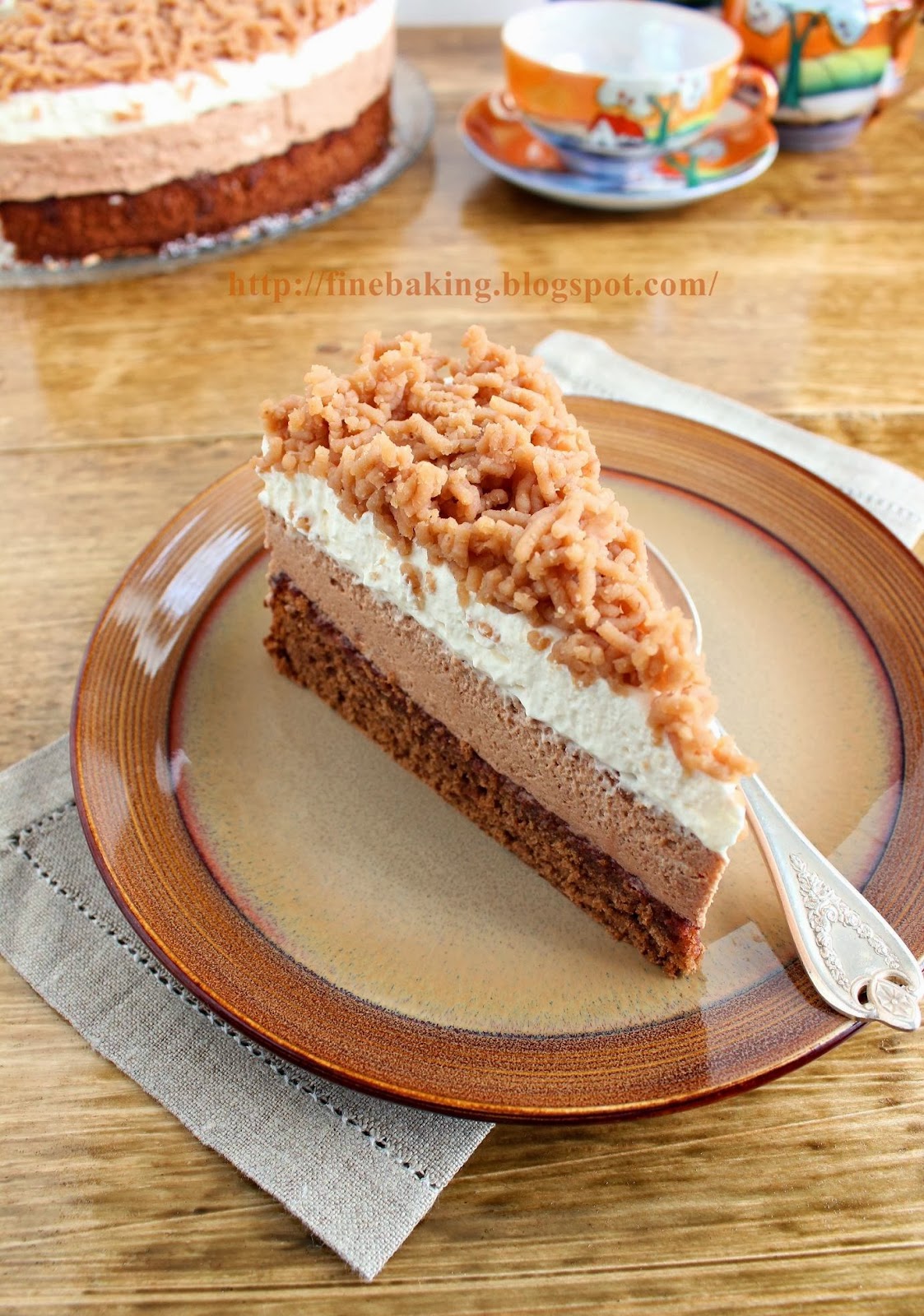 For chocolate cream:
100 ml. milk
2 teaspoons sugar
1 egg yolk
2 teaspoons cornstarch
5 teaspoons powder sugar
100 gr chocolate
500 ml. heavy cream
250 gr. chestnut puree
1 tablespoon baileys
To make the cream, bring the milk to a boil. Mix egg yolk with the cornstarch and sugar. Add 2 tablespoons hot milk to temper the egg. Add egg mixture to the boiling milk, stirring over medium heat to thicken it. Move it from the stove, add powder sugar and chocolate. Mix until everything incorporates nicely. While mixture is still warm, (if its chilled, it will be hard to incorporate into the whipped cream) whip the cream and stir gradually into the chocolate mixture. Spread immediately onto the cake and freeze.
When chocolate cream is semi-frozen add white cream layer. 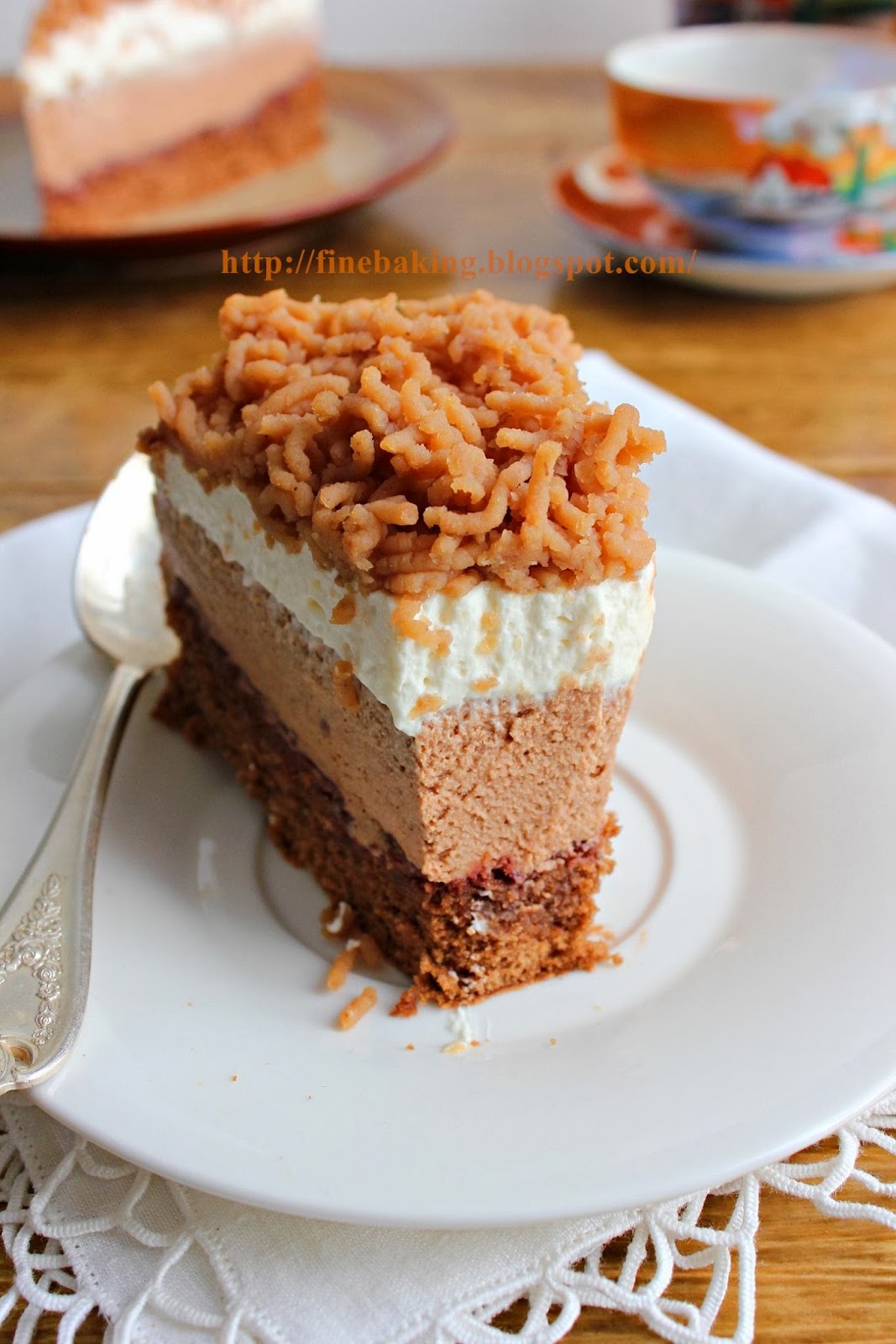 This work by http://finebaking.blogspot.com/ is licensed under a Creative Commons Attribution 3.0 United States License.